Perhaps the least known category of the 4WD Camper group would be the slide-on Camper. Effectively it’s a 4WD ute and a Motorhome in one. That’s it's huge benefit. Slide off the camper and you have the versatility of an everyday ute. You can upgrade the ute while still keeping the camper and vice versa. You can tow a boat behind it.
A slide-on allows you to “slide” the camper off the vehicle, either on site, or for storage at home. The big benefit is you are left with a vehicle, independent of your camper. But this is where it gets interesting. The choice of a slide-on is broad, from the basic to the highly comfortable. The choice of suitable vehicle is also very broad. Mixing and matching the two have numerous traps for the unwary. This site is intended to help unravel the puzzle, to simplify the path to enjoying the benefits of slide-on camping. 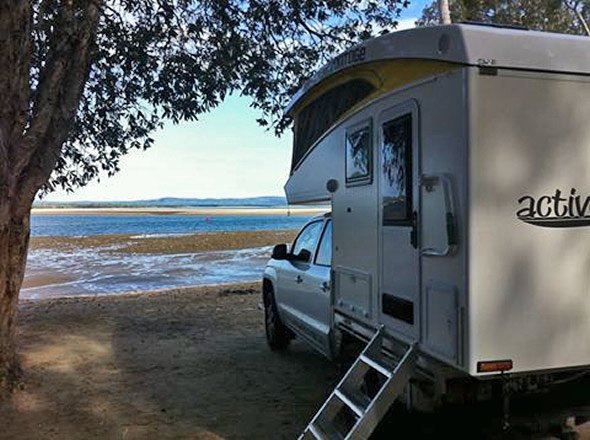 While slide-on 4wd campers may not be a main stream camping option, they are not new. I was going through some old photos travelling around WA in the mid 70’s, and there it was, a slide-on camper! It’s probably a fair assumption the slide-on market was  in general, traditionally limited to tradies or farmers. And that’s simply because they had tray top utes. That of course remains a limitation – you need a four wheel drive ute with a tray. There are some slide on campers for tubs, but the market is generally sourced from US imports, which once again can be a weight issue. More on this option later.

The USA, as in our Canadian experience below, has by comparison a more mature slide on market. One key difference is because of their larger utes/ pickup trucks. These vehicles such as the Ford 250/350’s or the Dodge RAM’s have a GVM load capacity more equivalent to our lightweight trucks. That means they can stack a lot of comfort and space in their campers without as much concern about weight.

The challenge in the Australian market are our 4wd utes are much lighter by comparison, meaning less space and less comfort. The limited space is one of the biggest resistances to the mainstream caravanning market compared to the more liberal space potential in a caravan. A caravan can be as long as you like. By comparison a slide on camper is limited by the tray size.

Imported North American slide-on campers, including the Adventurer pictured above, have a reasonable share of the local slide on market. Northstar and Palomino are also popular imported brands. However, their biggest challenge is weight. Out utes are not designed to take their load. Or, in reality, these campers are not designed for our utes. Even if they do scrape under the legal load limit of the ute, which often may be questionable, some can look like a bulky top heavy misfit. But that’s fine, it simply depends on the use. 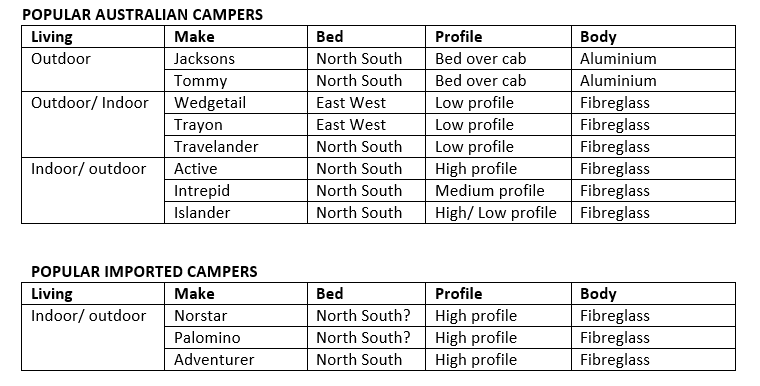 Pros: Offers the full versatility of a four wheel drive ute but with the added bonus of having your camper home on the back. You can slide the camper on or off - either back at home to store, or on site if you want the added accessibility of your four wheel drive unloaded.

Cons:  Unlike a caravan where livable space is only limited by the length of the van, space on a slide-on is a premium, restricted to the limits of the tray area. Also, unlike a caravan, weight is also consideration. Unless your slide on is on a truck, the principles of minimalistic living need to be applied.

Which Slide-on is right for you? To continue.... please click here